It should come as no surprise to anyone who has even a basic understanding of Atlantic Canada that topics that we now think of as environmental history have long permeated the study of the region. With an Indigenous presence since time immemorial, and as one of the first areas in North America colonized by Europeans, Atlantic Canada has a deep and rich history of humans interacting with local environments. We see this reflected in early scholarship that focussed on the region’s political economy and resource exploitation, and again in works produced since the broadening of academic fields in the second half of the 20th century to include such categories as race and ethnicity, gender, and class. 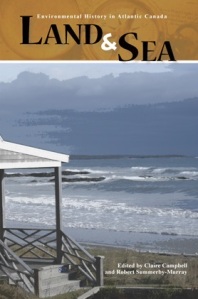 A purchasable example of some of the excellent environmental history scholarship being written about the Atlantic Region.

In keeping with this trend, environmental history topics also abound among the papers scheduled to be presented at the upcoming Atlantic Canada Studies conference, taking place at Mount Allison University from 5-7 May, 2016. Indeed, the intention behind this post is to provide readers with a general breakdown of the environmental history themes and papers present in the conference programme (see the full programme here). It should be noted that all judgements regarding whether or not a particular paper fits within a certain theme, or even whether it can be considered to contain elements of environmental history, are my own, based on the limited information available in the programme, and do not reflect the views of the presenters. Accordingly, I’ve divided the papers into four broad, sometimes interrelated themes: Indigenous peoples, industrialization and economic development, shifting spaces and landscapes, and identities.

Scholarship that examines the lifeways of Indigenous peoples and their relationships with local environments has been steadily increasing within Atlantic Canada Studies in recent decades. While always important, this type of research is now critically so in the wake of Supreme Court decisions and land claims, the rise of the Idle No More movement, and the release of the Truth and Reconciliation Commission report. On the morning of 6 May, there’ll be a panel titled “Resource Extraction and Development in its Place: The Struggle to Recognize Animal Personhood,” featuring papers by Amber Giles, Sherry Pictou, and Travis Wysote. That same morning, Diane Obed and Danielle Root will be presenting on a panel titled “Indigenous Education Beyond the Classroom.” There’ll be another panel titled “First Nations, Land, and Power” on the afternoon of 6 May, with papers by Bill Parenteau and Elizabeth Mancke and Stephen Dutcher. Also on the afternoon of 6 May, on separate panels, John Reid will be presenting on “Cricket, the Retired Feather Merchant, and Settler Colonialism: The Troubled Halifax Sojourn of A.H. Leighton, 1912,” while Dawn Brooks will be presenting on “Indigenous Blueprints for the Imperial Landscape.”

Industrialization and economic development has been a common theme within Atlantic Canada Studies since the field’s earliest days, and will definitely be well represented at the conference in early May. Gregory Kennedy and Amelie Montour and Ronald Rudin will be giving papers on the same panel on the morning of 6 May, respectively titled “Shifting Patterns in Response to Environmental Change and Industrialization: Landscape and the Adaptation of the Household Economy in Cocagne, 1871-1921” and “Dam Projects: Local Knowledge and Landscape in the Post­War Maritime Marshlands.” On the afternoon of that same day, there’ll be two panels on Cape Breton and Nova Scotia: “Perspectives on Cape Breton and Nova Scotian Development” (Don Nerbas, Courtney Mrazek, and B.A. Balcom) and “Cape Breton’s Labour History” (David Frank, Claudine Bonner, and Kristoffer Archibald). Aaron Clarke and Lindsay Golding will be presenting late in the day on 6 May, on “Mills and their Importance to Community Infrastructure in 19th-Century New Brunswick.” Finally, Andy Parnaby will be presenting on “‘The counterfeit principles of a free enterprise system’: The Antigonish Movement and the Sydney Steel Crisis of 1967” on the afternoon of 7 May.

Another common environmental history theme at the Atlantic Canada Studies conference will be shifting spaces and landscapes. On separate panels on 6 May, Shawn McCarthy and Beth Jewett will be talking about, respectively, “From Trial to Solace: Beaubears Island’s Emerge as a Public Space” and “Atlantic Canadian Golfscapes: Constructing ‘Natural’ Playing Fields, 1873­-1945.” Stephanie Pettigrew, Keith Grant, and Elizabeth Mancke, Adam Nadeau, and David Bell will be on the same panel, also on 6 May, on the subject of “Empire, Law, and the Making of Colonial Societies.” On 7 May, also on the same panel, Miriam Wright will be presenting on “The Chinese Immigrant in the City: Reflections on Race, Class and Gender in the Public Spaces of St. John’s, Newfoundland, 1895­-1949,” and Karolyn Smardz Frost will be presenting on “Planting Slavery in Nova Scotia’s Promised Land.” Then later on the same day, Gary Hughes will be giving a paper titled “Changing Landscapes: The European and North American Railway.”

The final theme is identities, which can be deeply intertwined with a sense of place. Martha MacDonald, Shoshannah Ganz, and Vicki Hallett will be on a panel on “The Politics of Culture in Newfoundland” on 6 May. In addition, on 7 May, Christine Harrens, Harvey Amani Whitfield, Ruma Chopra, and Catherine Cottreau-Robins will be on a panel titled “The Early Black Experience in the Maritime Colonies.”

It is exciting to see so many fascinating papers, on a wide variety of topics, in the programme of the upcoming Atlantic Canada Studies conference. It is my hope that this thematic guide will help conference goers locate those papers that are most likely to contain elements of environmental history. Good luck, and happy conferencing.