Author’s Note: It’s been several weeks since my last blog post. Over that period of time, I got married, moved to the state of Maine, and started a tenure-track position at the University of Maine. Now that life is adopting something approaching a regular routine, readers can again expect regular posts.

One of the themes that seems to be the topic of continuous discussion within the field of environmental history is how we need to do more than simply produce declensionist historical narratives. For those who aren’t familiar with this topic, it’s the idea that environmental historians need to avoid the lure of only telling stories of decline, where humans have degraded or ruined such and such an ecosystem, built environment, etc., over time. Now, that doesn’t mean we should write negative consequences completely out of our histories, but I do believe that most of the time declensionist aspects should be counterbalanced in some manner so as to provide our audiences with a version of events that comes as close as possible to actual lived experiences.

I’ve actually been thinking about how to go about counterbalancing declensionist narratives quite a bit lately. The reason I’ve been doing so is my upcoming course titled “Booms and Busts in North American History,” which I blogged about a couple of times last fall (see here and here). As described in the syllabus, “This course examines natural resource development and the broader commodification of nature in the geographical area now referred to as North America from the sixteenth century to the present. Particular attention will be paid to resource booms and busts as analytical windows into the various political, economic, social, and environmental consequences of the past exploitation of nature.”

One of my goals with the course is to try to provide students with a well-rounded and complex understanding of the history of resource exploitation in North America, particularly since the arrival of Europeans. I’m sure for many people the term “exploitation” immediately brings to mind images of Indigenous peoples being displaced, forests being clear cut, species being decimated, and waterways being polluted. And rightfully so, because that is a major part of the legacy of the last 500 years of resource exploitation on this continent. But I believe it is incumbent upon me, as an instructor and environmental historian, to take the general narrative beyond mere decline to something more nuanced and complex. That doesn’t mean that there will always be an immediately obvious positive side to every lecture, article, or book, but more often than not there has to be something more that we can provide to our audiences than simply doom and gloom.

A view of the St. John River and the Mactaquac area before the dam was built. The image is from a great ArcGIS virtual tour called “Before the Mactaquac Headpond.”

Let me offer an example from some of my own work. For various past Atlantic Canadian and Canadian history courses, I’ve lectured on New Brunswick’s Mactaquac modernization project of the 1960s (see this Acadiensis article by James L. Kenny and Andrew G. Secord for a good overview). It used to be that I always viewed the project through a negative lens: a story of an unwanted dam and misguided state planning, of locals forced from their homes, farms and Indigenous lands flooded, ways of life lost, promises of employment not met, ecosystems greatly altered, salmon migrations being blocked, hatchery programs put in place, and so on.

A few years ago, my views on the dam changed somewhat due to a colleague’s observation about an article that I was then preparing for publication. The article, now published, examines the development of water pollution regulation in New Brunswick from the 1940s to the 1970s (you can find it in this book). With regards to the Mactaquac dam, I originally approached it as a massive collection point for sewage and pulp mill waste, one that had be dealt with by the federal and provincial governments before the project could move forward. While it’s obvious to me now, my colleague made the observation at the time that yes, the project was all of the negative things described above, yet it was also the impetus for the establishment of the first comprehensive pollution abatement program along the St. John River. 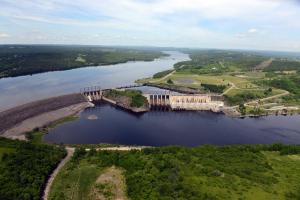 A present-day view of the Mactaquac dam and headpond (canadianriversinstitute.com).

This dynamic of positives and negatives still surrounds the dam to this day. Built in the late 1960s, the dam was supposed to last close to a century, but problems with the cement used in its construction has ensured that it has be replaced, decommissioned, or removed by the year 2030. There is now a major debate underway in the area about what to do with the dam. Many want to see the St. John River reverted back to its original state, but others have come to view the dam and its headpond as part of the “natural” environment and don’t want things to change. Of course, then there’s the factor of whether it’s more economically advantageous to leave the dam in place or remove it. Let’s just say, the whole issue is complicated.

Accordingly, that’s how we, as environmental historians, should present such subject matter, by making it complicated. It’s easy to explain the issue of the Mactaquac dam as a simple declensionist narrative, but it’s not, nor has it ever been. Sometimes, an extra effort has to made to counterbalance the declensionist in our histories. That’s something we should all keep in mind on a regular basis. It’s what I will be striving for as I prepare the lectures for my upcoming “Booms and Busts” course.