Over the last few weeks, I’ve been constructing courses for my upcoming position at the University of Maine. My last blog post detailed how I recently created a course called “History and Comics,” where I use comics studies and the comics medium to introduce students to various topics and themes commonly encountered in the discipline of history. Since then, I’ve put together a fourth-year global environmental history course, and while it is still only broadly sketched out, due to the fact that it’ll shortly be going up for approval with the university’s undergraduate curriculum committee, I’d like to offer what I’ve come up with so far.

As I was writing the syllabus, I had two larger goals in mind. The first was that I wanted to ensure that students were thoroughly introduced to the subfield of global environmental history, but at the same time not overwhelm them with the history of everything. Seeing as how the globe is a pretty big place, I think the temptation is there to try to cover too much historical material. My solution was to limit the course to seven major environmental history themes: Migrations, Agriculture and Settlement, Forests and Forestry, Water and Waterways, Biological Exchanges, Urbanization and Industrialization, and the Anthropocene. For each theme, there will be four lectures that will, to quote from the syllabus, “follow a rough chronology and compare and contrast how environmental historical processes unfolded in different parts of the globe to provide students with a general understanding of each particular theme.” At the end of the two weeks dedicated to a particular theme, there will be a discussion meeting based on associated readings.

Some of you are likely already making mental lists of all of the themes that I could have included in the course but didn’t. Believe me, I spent a number of hours staring at the wall and contemplating what should be included. It seems that for every part that you put into a course there are something like ten parts that you have to leave out. Since it’s a fourth-year course, I decided that it was important to prioritize in-depth examinations of subject matter, rather than more shallow explorations of a lot of material. Besides, I deliberately chose the themes so that a wide range of periods, places, peoples, and non-human nature can be included.

The second goal I had in mind was to move away from the usual major research paper. Trying to engage students through non-traditional means has been an interest of mine for a while. Not only is this evidenced by the “History and Comics” course, but in 2012 I wrote a blog post for the Network in Canadian History and Environment, in which I described some of the non-traditional methods I incorporated into a Canadian environmental history course at the University of New Brunswick. 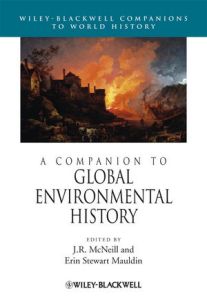 The main text for the course. Assigned readings will be used to make up for areas where it is lacking. (www.wiley.com)

In the case of “Global Environmental History,” the main non-traditional component is group website projects. As noted in the syllabus, the goals of the assignment are: “to engage students’ research, analysis, and critical thinking skills through a means other than the usual major research paper; to get students thinking about ways to organize and communicate historical information for a broader audience; to foster the development of additional abilities in digital literacy; and to make available a final digital product that students could potentially use in academic or professional portfolios.” The plan is for the websites to be created with free, online software, like WordPress or Wix, while the website format will be generally left to the group’s discretion, although some basic elements must be included, such as a bibliography page. I’ve also scheduled in-class website development sessions, alternating with the discussion meetings at the end of the week, as “time dedicated to group progress reports, going over technical aspects of the website project, and working on the actual websites.”

As with “History and Comics,” if approved “Global Environmental History” will be offered in the 2016-2017 academic year. I’m going to use the interim to reflect on and continue to improve the general course framework already established. For those who are interested, see below for a PDF version of the course syllabus. As usual, suggestions and ideas are more than welcome.