When I was an undergraduate at the University of New Brunswick in the late 1990s and early 2000s, the name “Acadiensis” always triggered within me a certain sense of awe and wonder. Don’t get me wrong, I was well aware that it was an academic journal, that it published articles on the history of the Atlantic Region, and that it was produced somewhere on the university campus. It was hard not to be aware to some degree. I can’t tell you how many Acadiensis articles I had to read as part of my honours history degree, but it was definitely a lot.

Nevertheless, that didn’t stop me or some of my fellow honours students from developing a sort of nerdy reverence for the journal. We viewed, somewhat naively, Acadiensis as a symbol of the craft we were training to join, of both the historians who had come before us and the history that had yet to be written. It also didn’t hurt that the articles in the journal actually made the Atlantic Region’s history interesting, something that many of us hadn’t encountered before that point in our formal educations.

It is many years, degrees, and full- and part-time jobs and positions later, and I still have a lot of respect for the journal. Of course, I’m now much less naive about the general operations of an academic journal, but that doesn’t diminish my appreciation for all that Acadiensis has done to bring the history of the Atlantic Region to the fore, as David Frank described so well in a presentation to the Organization of American Historians Annual Meeting in 1999.

With the launch of a new blog this past July, along with a new website, Acadiensis has entered the next phase in its mission to promote the history of the Atlantic Region. Much to my delight, I was asked to be a regular contributor to the blog. I accepted, with the understanding that I’ll be writing a few posts per year on a variety of history-related topics. For example, I will soon be assuming the position of Assistant Professor of History and Canadian Studies at the University of Maine, and regularly contributing to the blog is potentially a great way to encourage more cross-border scholarship and understanding in the region. Whatever the topic, this former undergrad, who was once filled with nerdy reverence, is just glad to be a part of it all.

For a good introduction to the Acadiensis Blog, click here.

To read my first contribution to the blog, a review of Ronald Rees’s New Brunswick: An Illustrated History (Halifax: Nimbus Publishing, 2014), click here.

A few Christmases ago, my partner’s parents gave us a promotional magnet for the city of Fredericton, New Brunswick, pictured here on our fridge, as a gag gift: 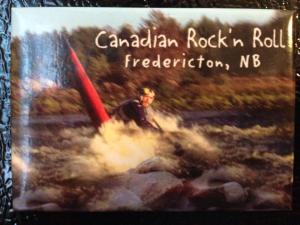 At first glance, the magnet doesn’t really fit with most people’s mental picture of New Brunswick’s capital city. Besides the fact that the text “Canadian Rock ‘n Roll” is rather odd and ambiguous, the image of the kayaker going over the rapids just seems out of place. Indeed, the body of water that flows through the city is the St. John River, and it looks like this:

This is a panoramic shot I took one evening last summer looking from a friend’s condominium on the north side of the river at downtown Fredericton on the south side. At this point in its course, the river is close to a kilometre in width, and except for a few weeks during the spring freshet, its flow remains fairly calm throughout the year. As you can see, there is nowhere to take an action shot like the one on the magnet.

However, I consulted with a friend of mine who does a lot of recreational kayaking around New Brunswick, and it turns out there are a number of rivers and larger creeks within a half-an-hour drive of Fredericton that have rapids like the ones shown on the magnet. It is thus very likely that the image of the kayaker is an actual photograph taken in the general vicinity of the capital region, and not, as I first believed, the result of some unsuspecting individual filling out an order for promotional magnets with a stock photo.

Consequently, the magnet serves as a good reminder of how, as scholars, we need to remain prudent and critically-minded when encountering environmental imagery. While images can be sometimes tricky to interpret, they can also be incredibly powerful analytical tools if we use them wisely. And for the non-scholars out there, images like photographs are referred to as visual culture, and the process of interpreting images is called visual culture analysis.

Now I’m far from an expert on such matters, but here are a few basic questions that I’ve found beneficial to keep in mind when conducting an analysis of visual culture: am I reading too little or too much into a particular image? What was the creator’s intention behind it? Is it an accurate representation or misleading, either deliberately or unwittingly? What can be learned from the image in general or from specific parts of it? Does it tell me anything about the time and place in which it was created or about the person/people who created it?

Take, for example, this photograph of Stearman biplanes spraying DDT over New Brunswick’s forests in the 1950s:

First off, some might recognize the image from the front cover of the Winter/Spring 2011 issue of the journal Acadiensis featuring my article on New Brunswick’s spruce budworm spraying program.

Outside of my shameless self-promotion, there is the serious intent behind the creation of this photograph. The spruce budworm spraying program was mired in controversy in the 1950s. Conservationists accused the program of, among other things, being haphazardly planned, leading to blanket spraying with little regard for more sensitive areas like waterways. Officials with the public-private company that did the spraying, Forest Protection Limited, wanted to counter any notion that the program was conducted carelessly, so they commissioned a series of photographs to demonstrate that spraying was undertaken in an orderly and controlled manner. Like the one above, many of the photographs were taken from the spotter plane, and depict the spraying operation underway in the typical two-plane formation. The even-aged forests in the background, the outcome of past harvesting, add to the implicit sense of human control over nature.

My goal as an environmental historian is to understand the intent behind the photograph and to even move analytically beyond it. Through an examination of the historical record, I worked out that the photograph was in effect a form of corporate propaganda, designed to make the spraying program appear more benign than it actually was. But the image represents so much more than that: scientific and technological hubris, human desperation to keep nature in check, the real fear of what would happen if the budworm wasn’t controlled through the spray option, the concerns of conservationists and environmentalists over the damage being done to ecosystems, the dead and dying fish and birds among the even-aged forests. I’ve used this image quite a bit when lecturing and giving presentations, and believe me, it usually resonates with people on many levels.

Whether encountering environmental imagery from the present or the past, there is no perfect, one-size-fits-all approach. The best we can do as scholars is proceed cautiously, ask lots of critical questions, and be open to all sorts of possible answers, yet the rewards can be great. Fortunately, there’s a magnet on the fridge at home to remind me of all of this on a daily basis.

Without fail, the first question I’m asked when I explain to people that my academic focus is environmental history is “what is environmental history?” This is a somewhat difficult question to answer, seeing as how environmental historians are constantly debating how to define our field, and sometimes even whether the field actually exists. A fundamental definition would be something like the study of past interactions between humans and non-human nature. Of course, that’s pretty vague, and the easiest way to add some nuance to this definition might be through the use of a visual aid.

If you’ve visited my site before, you probably noticed that the header consists of part of this photo:

There’s a short story behind this photo. A few weeks ago, my partner and I went for a hike with some friends in a conservation area near the town of Millbrook, Ontario (information on the conservation area here). After an intense trek on one trail that was covered in poison ivy, we decided to hike along Baxter Creek, where I came across the view pictured above. I thought, “Wow, this would make a great wilderness shot,” and so I took the photo that you see here.

The more I reflected, though, the more I realized that it was problematic to think of the photo as a representation of wilderness. The concept of “wilderness” denotes a limited amount of human modification to the landscape, and that was definitely not what we saw on our hike that day. From time immemorial, Indigenous peoples would have interacted with this landscape, and then after the arrival of Europeans, lumbering became a major economic activity in the area, hence the reason the town is called “Millbrook.” Even now, the landscape has been set aside as a conservation area, to be enjoyed by locals and tourists alike, yet there is evidence of human modification everywhere, from boardwalks to trees that have been cut down. In other words, the creation of a landscape that appears wild but easily accessible for hikers.

Perhaps what struck me most about the photo were revelations about the pretty flowers in the foreground. One of my fellow hikers, a friend who works for an environmental organization in Peterborough, identified them as dame’s rocket (Hesperis matronalis). Widely considered to be an invasive species or weed, they were introduced as an ornamental for the benefit of European settlers. Thus, one of the most visually appealing aspects of my so-called wilderness photo is not technically natural to North America.

All of the reflecting that I just described was me, in a very basic way, doing environmental history. It’s a way of looking at the landscape around you or in other places, realizing that it hasn’t always just been the way it is now, and working out what sorts of changes the landscape has gone through, and why they occurred, over time. This explanation is still not perfect (believe me, my colleagues will point this out), but hopefully gives you some sense of what it is that we do as environmental historians.

So I spent what seemed like an inordinately large amount of time today learning how to set up this website. Why did I bother? Well, I’ll be starting a tenure-track position at the University of Maine in January 2016, and it is my hope that this site will grow with me as I enter the next phase of my career. I’d also like to share my experiences of being a Canadian scholar moving to the United States. I plan on posting regularly on a variety of subjects, from everyday shenanigans, to what’s going on in the classroom, to my latest historical musings. Check back often and see what I’m up to.